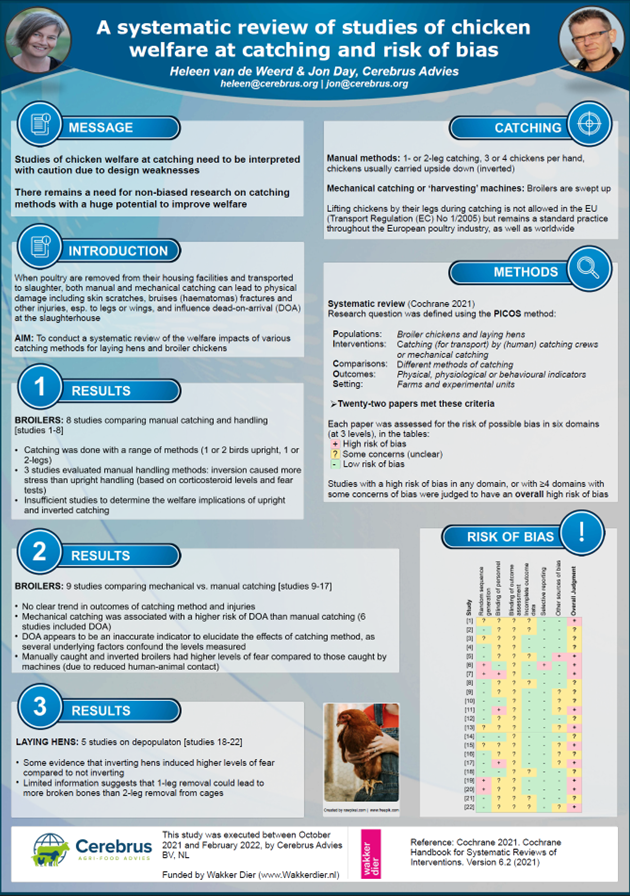 The ways in which chickens are caught can cause injuries and millions of chickens arrive dead at the slaughterhouse each year (dead-on-arrival [DOA]: 0.1% to 0.6%).

We conducted a systematic review to better understand the welfare impacts of various catching methods for laying hens and broiler chickens. Papers were screened against clear inclusion and exclusion criteria. Twenty-two papers met the criteria and were included, grouped around three themes. Each paper was assessed for the risk of possible bias in six domains (no randomization, no blinding of assessors or data analysts, not reporting missing data, selective reporting, or other types of bias) and three levels (low risk; some concerns; high risk), as well as an overall bias judgement.

Eight papers compared manual catching and handling of broilers, with a range of techniques (one or two birds upright, one- or two-leg catching). Only three studies evaluated manual broiler handling methods and found that inverted handling caused more stress than upright handling (corticosteroid measurements and fear tests in non-commercial settings). There were insufficient studies to determine the welfare implications of upright and inverted catching. Nine studies evaluated mechanical vs manual broiler catching methods.

Mechanical catching was associated with a higher risk of DOA than manual catching (in 6 studies that included DOA). However, DOA is an inaccurate indicator to distinguish between the effects of catching method, as several underlying factors confound the levels measured. With regards to catching method and injuries, there was no clear trend in outcomes. Broilers that were manually caught and inverted had higher levels of fear compared to those caught by machines, due to reduced human-animal contact with machine catching. Only five studies included hen depopulation and handling of laying hens. There was some evidence that inverting hens induced higher levels of fear compared to not inverting. The limited information on cage depopulation suggested that one-leg removal could lead to more broken bones than two-leg removal.

All studies had some concerns for possible bias and 50% of the studies had an overall high risk of bias judgment. Results need to be interpreted with an awareness of possible weaknesses and uncertainties, and conclusions drawn with caution. Further research -of good quality- is needed, with huge potential to improve poultry welfare.